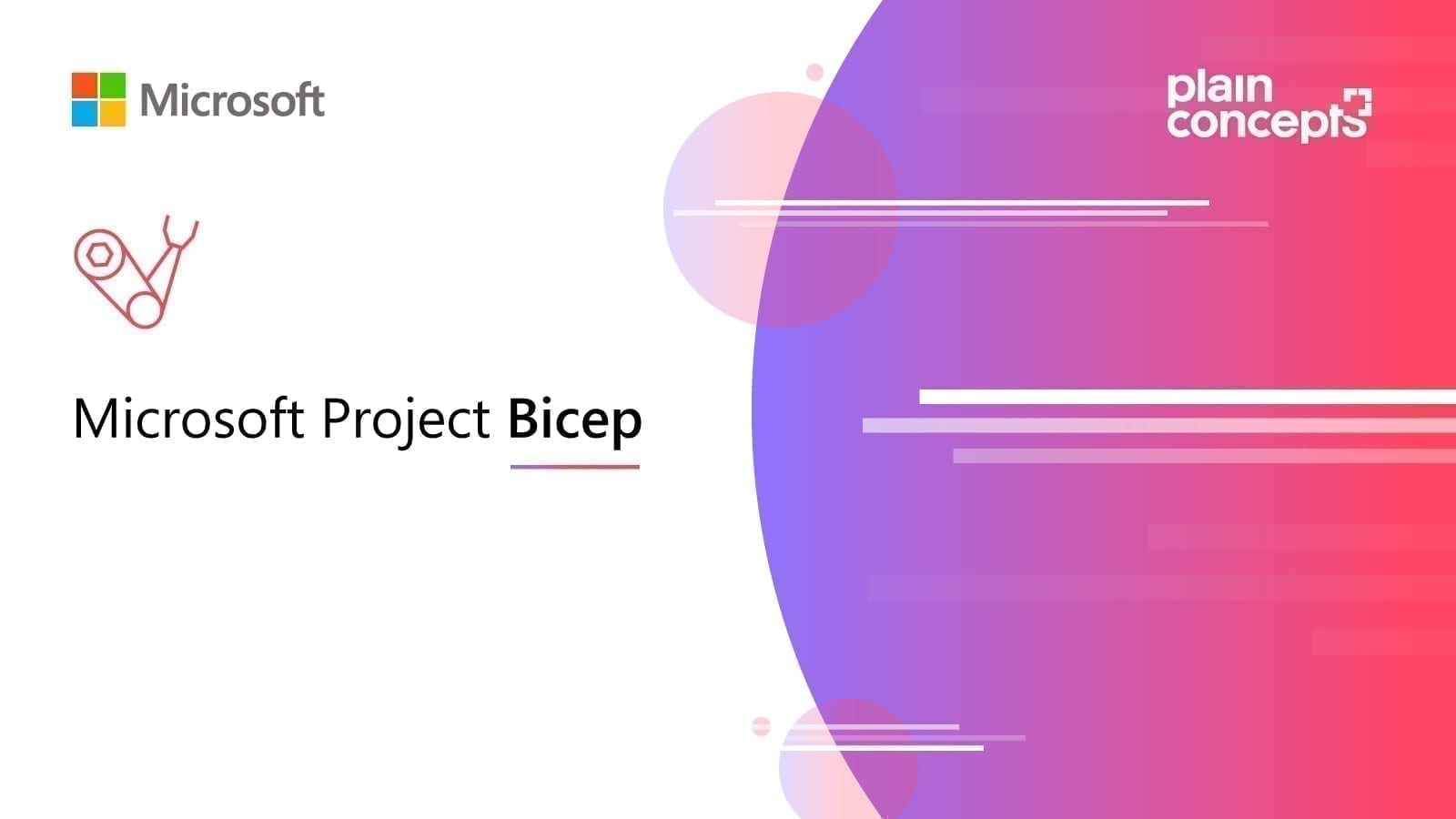 It provides a transparent abstraction over ARM templates (we know ARM templates are not the easiest to author), all the things we can do with ARM templates until now (and in the future), can be done with bicep (excepting known limitations that Microsoft expects to solve in further versions). However, is ready for production use. Using Bicep and some of the tooling in this post, it is now much easier to build out ARM templates.

Therefore, I wanted to make a simple introduction, because I find useful to know about this new DSL, its simplicity and features it will have over traditional ARM templates to deploy Azure resources. It will allow devs to build ARM templates quicker and easier than ever.

Why should I care about Bicep?

There already are alternatives like Terraform, Pulumi, and other IaC offerings to avoid the complexity of ARM templates… Well, I would like to admit I have used Terraform for Azure in some projects and I am very happy with it, its Azure providers are really awesome, but in some cases, with new Azure features, products or configurations, we will have to wait to the provider to implement this changes (or will not be available in a foreseeable future, such the Azure Portal integration). Using the “AzAPI Provider” instead of the “AzureRM provider” solves the wait for the provider to implement support for newest changes in Azure. If using the “AzAPI Provider”, we will be using the same API as Bicep uses for deploying resources. Nevertheless, we will have to deal with the Terraform state, without Azure Portal integration and missing some integration features such as Azure Policies.

Instead of this, Bicep is covered in all Azure support plans since the 0.3 version. As it compiles down directly to standard ARM template JSON files and its supported and backed-up by Microsoft, we should have all the new features, products, and configurations available out-of-the-box (which is reassuring), as well as an awesome Azure Portal integration and some better integration. 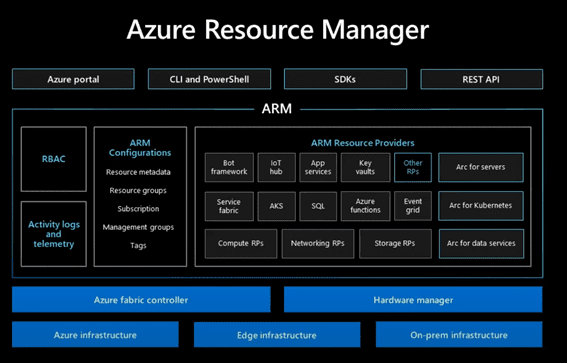 In my opinion, I think it deserves a try for devs deploying resources to Azure. However, it is important to highlight that there is no reason to switch to Bicep if you are already using terraform or other IaC provider, since there is so much effort after its providers to make them work great with Azure, and Microsoft itself it is backing up this effort. The reality is that there are so many projects using ARM templates and Microsoft is trying to make it easier to manage this and to provide its own tooling to start with IaC (without having to depend on third sources).

Both are two leading IaC (Infrastructure as Code) offers. Regarding infrastructure, integration and usability, both have very user-friendly features which makes them really similar in some aspects. A key concept to know is that there are not important usability features when using Bicep versus Terraform.

Their infrastructure and integration features make it easier for developers to implement IaC solutions. The only important decision to consider is if you are deploying to more than one cloud provider (or if your infrastructure will consist of a multi/hybrid cloud environment). If the answer is yes, then Terraform will fit you the best, since Bicep is solely for Azure resources.

Performing a more in depth comparison, there are some key differences that we need to know:

Regarding integration and infrastructure

Be sure to consider the previous concepts (and your infrastructure requirements and preferences) to make the best choice for your organization.

Getting started with Project Bicep

It is very simple getting started. We only need the Azure CLI. It is up to you to install other tooling (CLI, the VS Code extension, etc.). The process for these tools is simple and documented in their repository. Note that is also a Bicep PowerShell Module, if we want to have a great wrapper for the Bicep CLI in PowerShell.

The next step is to learn about Bicep and its syntax. A good start point it’s the official tutorial. There are also great resources to try Bicep, such as the Bicep Playground and the Visual Studio Code Devcontainer/Codespaces repo.

After this process, and after playing for a while, we should be ready to use it and ease our Azure deployment templates.

Interpreting the schema above, the process would be as simple as:

With Bicep, we are simplifying the process of creating ARM templates a lot and getting a lot of benefits. One of them I found very interesting is the possibility of making separate bicep files to generate a single ARM file, its modularity feature.

Let’s take a quick look in differences between a bicep and an ARM file (which are equivalent), from a simple quickstart template from the Azure repo: 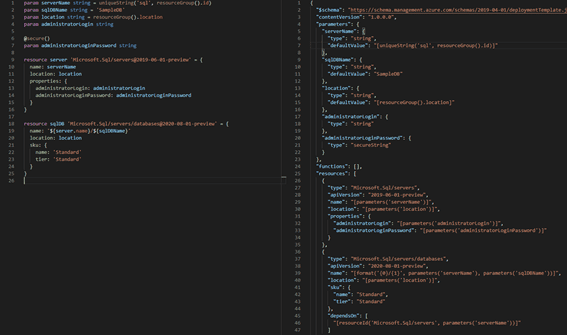 Looks simple and it is, but…

How convert ARM templates to the Bicep format?

There are two different approaches:

Nevertheless, it is important to highlight that, since Bicep compiles down to ARM templates, we could also have Bicep and ARM templates coexisting at the same time, and incrementally convert the templates or let the old stay as standard ARM templates (as the developer wants).

Since Bicep its “only” tooling, we could easily implement compilation of Bicep files in almost every environment. A simple and generic approach would be to download the binary from the GitHub releases and execute the binary with our Bicep files to JSON. But this it is not necessary at all as commented out before, with the newer versions of Azure CLI and the PowerShell Az module.

While being simple to implement this generic approach, the community and Microsoft itself it’s starting to provide us the necessary extensions, packages, and actions to include Bicep tooling (if we need it) in our pipelines.

For Azure DevOps Pipelines, I have already some implemented tasks to abstract and simplify the process for Bicep in a pair of tasks, which can be found in the README of the official project or in the Visual Studio Marketplace.

Nevertheless, if you do not like to include third-party extensions in your Azure DevOps organization, we can do our own pipeline (downloading the tooling by ourselves).

There is a community developed GitHub Action to include Bicep in our deployment process when using GitHub Actions. As said in the Azure DevOps Pipelines section, we could implement our own action (downloading the tooling by ourselves).

Bicep it is only a binary that can run cross-platform. So nowadays, I think there would be no problem in any CI/CD environment to introduce an extra step to handle ‘.bicep’ files. Note that only for deployment purposes it is not necessary at all.

It would only be an executable that could be downloaded in every run or saved in our environment, that we need to run against a series of ‘.bicep’ files.

There is really no reason to start embracing Microsoft Bicep…

There is much more to discover (and features to come!), for now, we wanted to give you this series of initial concepts so you start testing what Project Bicep can offer. 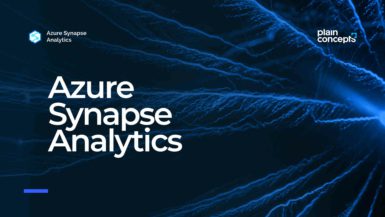 A Guide to Azure Synapse Analytics

In this article, we break down what Microsoft Synapse Analytics is and why you should choose it for your company's data processing. 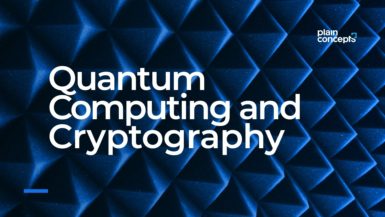 Quantum Computing: A Blessing or A Curse (Part 2)